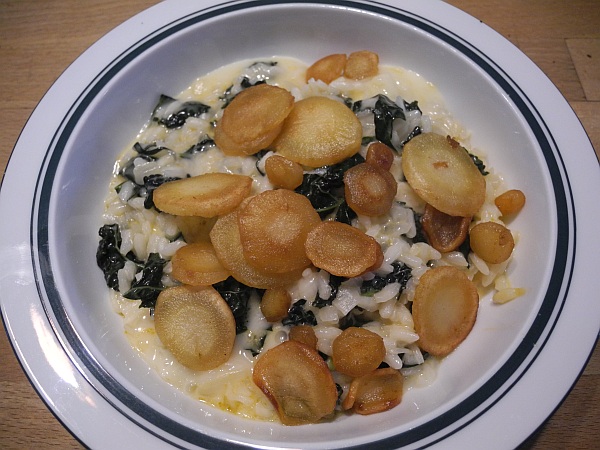 D found parsnips at the farmers’ market awhile back and bought them, thinking to make this risotto (I wrote in the recipe here). We finally got to Cheese Board for taleggio on Thursday, and I bought the kale at the Bowl… Friday? Sometime. Anyway, it was still perfect today. We went to “our” hill in the park about 3:40 and

were late getting home – after 6 – so we both worked on getting dinner started. I washed up the kale and stemmed the leaves, and peeled off the outer layer of the taleggio, leaving it just a bit (maybe 10%) short of the requisite 200 grams. D prepared the parsnips and got started on them, since they are candied and cook forever, very slowly. He took care of the rest, and I went off for my shower.

The risotto looked extra kaley, and extra cheesey, and I asked had he used the full amount of riso (this time, a new type called carnaroli, which he picked up at the Bowl) and he said yes, exactly a cup. I said no, I weighed a cup of riso the other day and it was only 200 g, the recipe calls for 300. He said no, 200. Finally, it just looked so weird, I was sure it was 300g, and additional riso would solve both the kale and the cheese overdoses, and so I went and looked at the recipe. Stop! You’re both wrong – it was 320 g. So, the dish had only 5/8 of the requisite rice. D will make it up tomorrow or sometime for a re-run.

The recipe suggests a rose, but D said he’d prefer a red, especially on the basis that we had had served this a bunch of times with favorite red wines – Frequently our old “Friday Wine” Cantina Zaccagnini Montepulciano d’Abruzzo, more recently our much-loved St. Jacques d’Albas Minervois. So I went down and dug around, brought up a Chateau de Manissey Cotes du Rhone (similar to the Minervois in earthiness) and also a wine I wanted to ask D about, called AN2, that we got a couple months or so ago at The Wine Mine. It also says “Falais” and is from Majorca. “That’s the one I was thinking of,” said D, as I emerged from the cellar. He was sitting on the back stairs guarding the cellar door from invasion by our feral cat Notch, lest she get caught down there (again). So. It was a fine choice, though nothing special in the way of synergy. 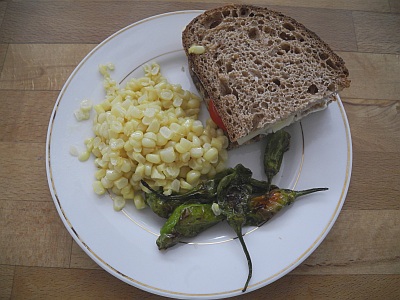 We had Monterey Jack sandwiches with tomatoes and a bit of onion. Forgot the lettuce – LOL! No doubt b/c I am so used to pan-grilling the sandwiches, which is not a time to use lettuce. D says, “They were good, though.” I defrosted the last slice from my Morell’s multigrain loaf for myself, and cut two slices from the new Acme Italian Batard for D.

While D was at the Bowl, I texted him to buy an ear of corn so we could have the shishitos with it for lunch. I washed the peppers, and he cooked them, then the corn in the same oil as usual. Yummy lunch!

Just had to post this pretty picture of peaches, from Woodleaf Farm. Half of each, in large hunks, went over my Grapenuts and pecans (with Silk soymilk). 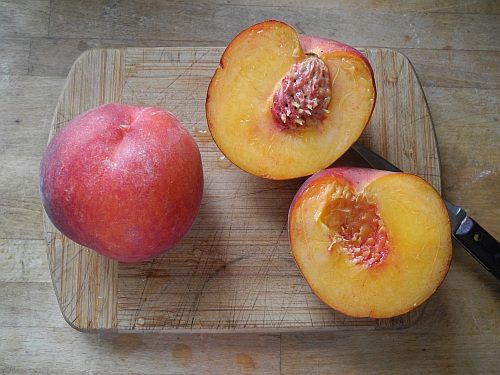