Posted on September 10, 2018 by berkeleybarb 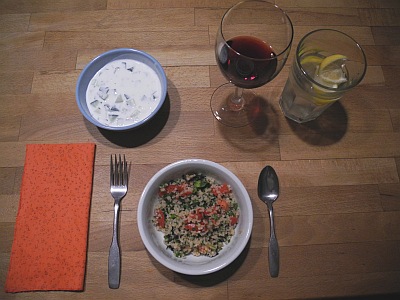 Tabbouleh is one of the dishes on my “summer tomatoes” list, and we decided this would be a good time for it. We had three teensy Dirty Girl early girls left from Tuesday, and I gave those to D, while he was working over a pile of early girls from Tomatero on Saturday (yesterday). I had washed (3 times!) and spun a bunch of mint from the Bowl and laid it out to dry, and also washed and laid out a pile of parsley from our garden, before we ran off for a good workout-walk at Cesar Chavez Park. We went up and down hills and through unpaved trails to start, instead of just orbiting around the perimeter as we more usually do. Then we did an orbit (40 minutes at a relaxed pace) before heading home. Then I boiled water to soak the bulgur for 20 minutes, covered (a scant cup of bulgur – all we had) and strained it before heading for the showers, whereupon D finished up both the tabbouleh and the raita. He chopped scallions and made the lemon/olive oil dressing (about 1/2 and 1/2), as well as chopping the herbs and tomatoes. 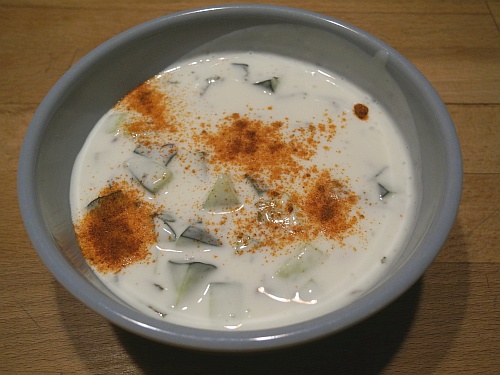 D thought a yogurt dish would be good with the tabbouleh (correct) and, remembering we had a good cucumber to use up, suggested what we finally remembered was called a raita. I found this recipe on epicurious, and D more or less followed it, making half rather than all of it. Dropped paprika on top after I took the “setting” picture 🙂 We ate all that he made. I bought Strauss whole milk yogurt at the Bowl – a quart, at D’s behest, given the expectation of warmer weather. I also bought an Acme Rustic Sweet Baguette, since D said yes, get bread, and also “baguette.” Thought it was to go with cheese, but of course the cheese idea had disappeared to make way for the yogurt, so the bread seemed superfluous. However, we did have some and D said he was glad we had it for dinner.

I found another raita on epicurious and am linking it here just so as not to lose it. It has cilantro and scallions instead of the cumin seeds and 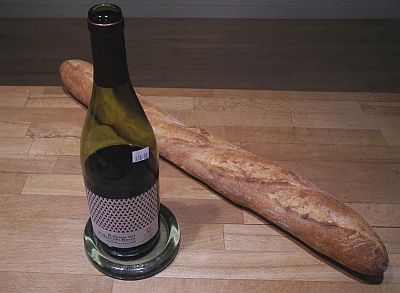 D chose a wine we have gotten twice from The Wine Mine, Villa Locatelli’s “Refosco dal Peduncolo Rosso.” We had a discussion of the pronunciation of Peduncolo (has to be accented on the DUN not the CO!). D especially liked how the wine went with the taboulli.

D especially likes white peaches, so I served out one from the Bowl for dessert. It was very good!

My friend M has been visiting from NYC since Thursday evening, and came to the Grand Lake Market for a visit on Saturday (yesterday). Despite there being four instead of three people, we had some Arizmendi pizza left, and so D and I had it for lunch today. D also made a salad with something resembling butter lettuce (from Blue Heron), tomatoes from Tomatero or Dirty Girl (writing this the 11th sry), some green bean pieces, and celery, and over the top, the dressing left over from the Greek Salad we had on the 3rd. We split a Vetiver lassi from Lakshmi. M is on her way south to LA today.