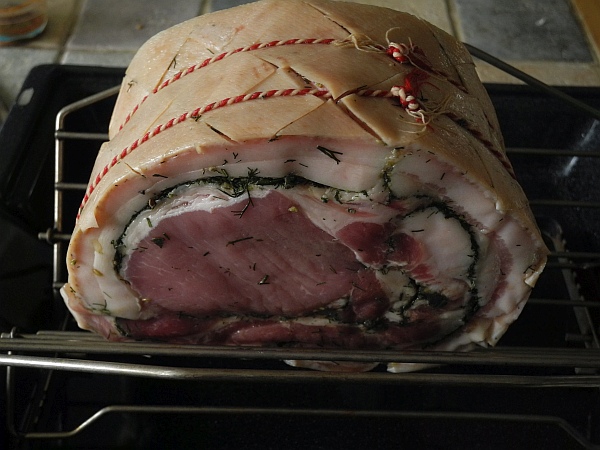 This was a celebration dinner, my excuse to purchase Christopher Lee’s prepared (but uncooked) porchetta, which he describes thus: 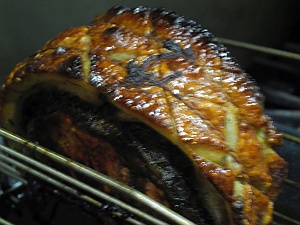 The cooking instructions were straightforward: place on a rack in a roasting pan skin side up. Roast 425F 90 minutes, then 350 for 60-80 minutes. Remove when the temperature is 165 and let sit 30 minutes. The only problem was that when I checked after 60 minutes at 350, the roast already had an internal temperature of 200, and was becoming black on the outside. 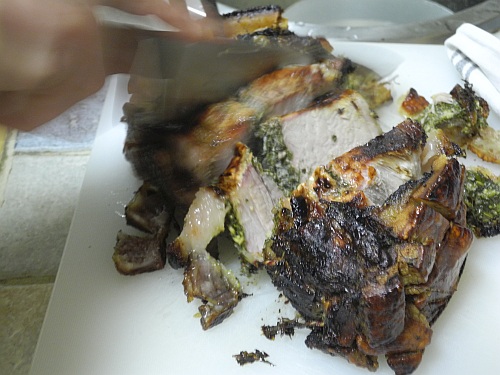 It was perfectly delicious, though the loin section was slightly on the dry side. I’m guessing that these cuts through the usual long porchetta roll allowed the hot air to heat the central pork loin without having to go through the layer of pork belly, and that might have caused the drying. It was not horribly dry, just slightly on the dry side. The flavors were outstanding. 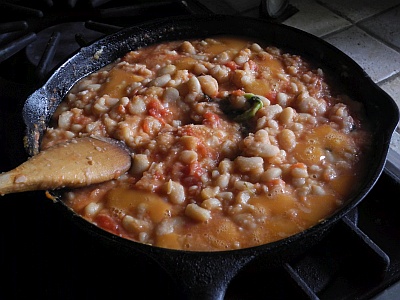 D tried an amalgam of recipes to create fagioli all’uccelletto. I bought, then quick-soaked and cooked the cannellini. However, after we’d cooked them less than an hour (in about 4 1/2 cups water, with 1 tsp salt added at the beginning), D & I made a post-office/farmers’ market run, so I turned them off. When I turned them back on later, I checked and they were already a bit overdone, falling apart slightly, which was less than optimal for this dish. 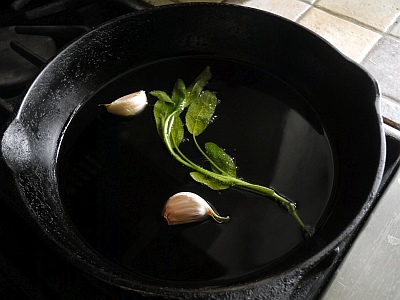 D put oil in the large cast-iron frying pan and gently cooked some sage and unpeeled garlic cloves, then added the well-drained beans, took the Strianese tomatoes (14 oz or so) and pushed them through the large sieve that we bought ages ago to make passatelli (it worked!). [He later added more sage than in the photo b/c he could not detect the sage taste.] These were perfectly good, but not anything special. I’d like to 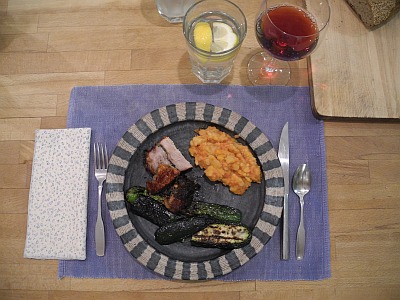 taste this dish cooked by a Tuscan chef so I knew what we were aiming at. E wanted something green, and suggested spinach; I said maybe R’s collards with bacon; D said no no no to adding bacon to this meal and suggested, since we were not using the grill for anything else, that we grill strips of zucchini. So I put two medium-large zucchini, cut into lengthwise strips, into the Russel Wright veggie bowl (it’s long), poured over a bit of olive oil, and mooshed them around till fully coated. Should have added S&P with the oil, but D added that later on the grill. 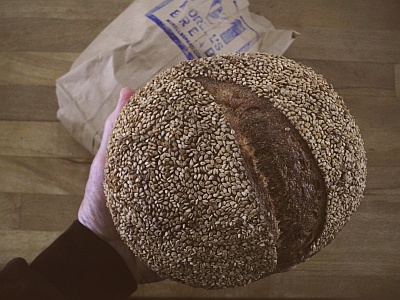 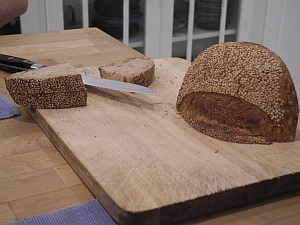 I got the cutest little loaf of whole wheat sesame seed bread from Morrell’s at the market!

So, it was a very good meal, with some minor drawbacks. 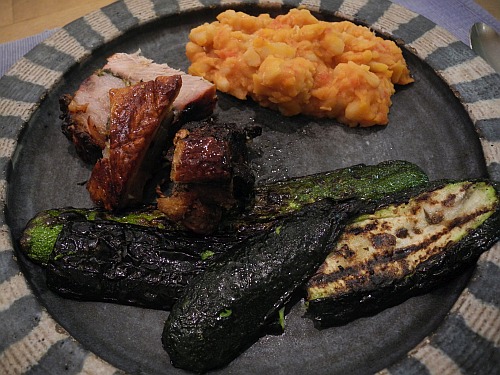 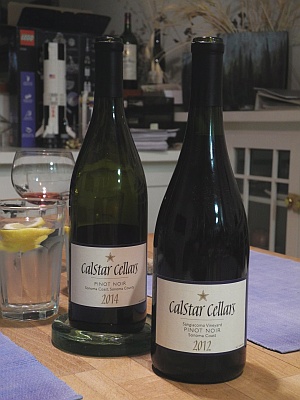 D suggested pinot noir, and I googled “wine for porchetta” and got a wine publication recommending – a pinot noir (Marlborough, they said, but of course we would have CalStar) We had a * Sonoma Coast for Cooking Wine, which lapsed over into dinner wine, and then the 2012 Sangiacomo Vineyards PN with the meal. Most excellent!

R was taken somewhat by surprise at the idea this might be my displaced (un) birthday dinner, and I think was put out he did not have time to make a serious cake, which he enjoys. He made a sumptuous chocolate pie, rich and thick and delicious, with a crust that tasted like Oreos. The decoration he created using a stencil that he commanded his GloForge to cut. Amazing.

Instead of trying to decide among the photos, I’m just posting a slew of them. 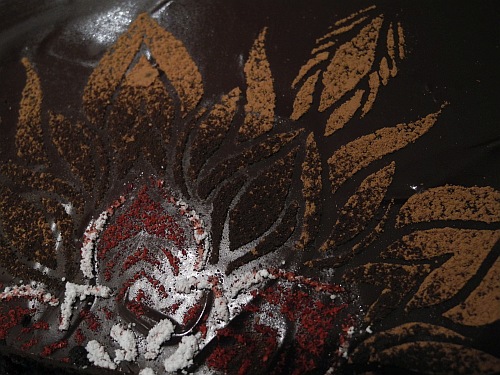 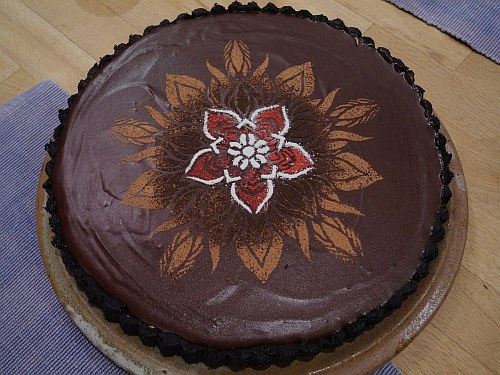 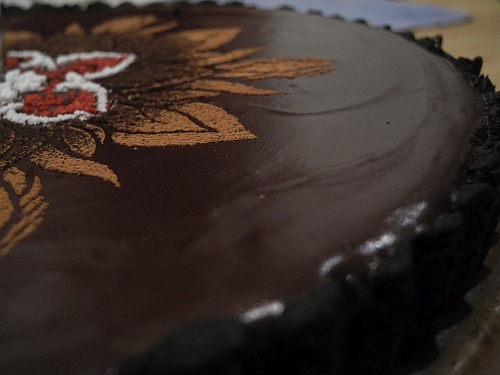 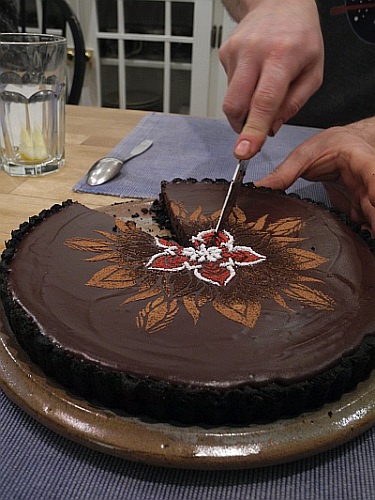 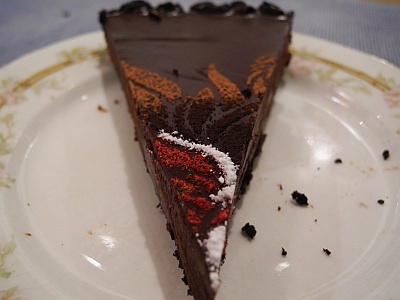 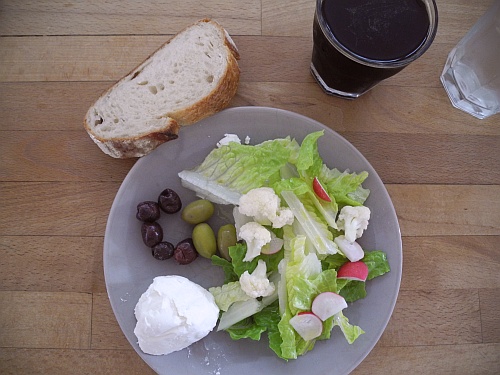 This was a “using stuff up” lunch, but you wouldn’t know it. Really nice salad by D, picholine and Nicoise olives, and some smoked chevre he brought home from Cheese Galore in Baltimore. We split a small “Death of Emperors Stout” from R&E.