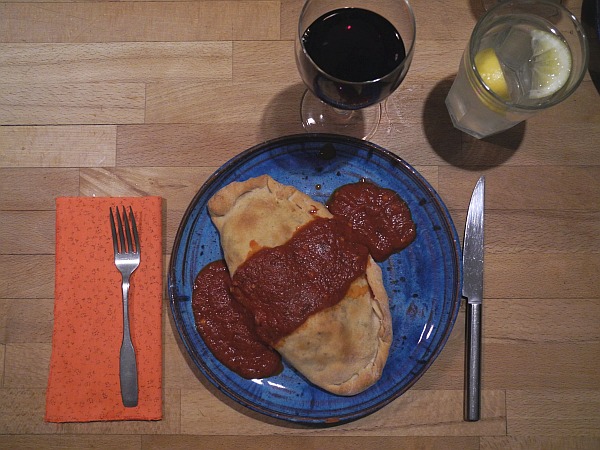 We had three broccoli stems to use up, but they were getting old (with gaps down the center, in some cases). D was going to the store, and since we’d planned to use up the stems in this meal but might not have enough, I said why not get some more broccoli with stems (instead of “crowns” whose stems are minimized). He did, and I ended up using all the new stems and most of the old ones to get the 2 cups the recipe calls for. Then I was ready to prepare the cheese, oven preheating and all that – and wait… do I actually have mozzarella?? It’s such a staple I never think of it. I didn’t see any quickly, but D suggested there were some pieces in the freezer. And there were, but they were old… So I pulled out two, shaved off what looked to me like freezer burn from one of them,

and tasted a bit. Slightly odd, but not bad. D agreed that it was good enough for this recipe, which has so many other tastes. So I used 3 oz rather than 4, and 2 oz of parmigiano. I also had to make new dough to do this, so I have two 1/3-recipe rounds in the freezer, and split the other 1/3 recipe for this. I wrote the official recipe on the backup recipe blog, here.

D was thinking about broccoli and cheese and suggested we use the Slovenian “Mea Culpa” wine in the fridge, but I said no, needs a red. So he went to the cellar and brought up a “tester” from Trader Joe’s, a Grifone Riserva (2014) Chianti. It was fine, a good choice, though nothing to write home about.

We had the last two cookies from R. He made the chocolate ones, which he says have no flour or dairy in them. Amazing! But I forgot to take a picture tonight. I need to go back and add the description to last night’s entry, don’t I…

I made us grilled cheese sandwiches with raclette from the Bowl; put mayonnaise on both sides, and thinsliced red onion on miine. D wants to try this without mayonnaise, even. It was a really good sandwich, and I liked the onion on it. Also quick-sauteed, in butter, a good pile of the edible-pod peas that D bought (again) in a discount bag. D came home from the Bowl with a bag full of little Persian cucumbers, and set about chopping them into rounds and putting in yogurt, with dill seeds and flax seeds. He couldn’t find cumin seeds. It was a pleasant addition to lunch.