We wanted to finish up our taxes, so D suggested an easy dinner – just cook up two of the sausages E&I bought at Costco (despite the “Paleo” brand, which was obviously unrelated to the food) and have some rice and veggie. I pointed out that the sausages came fully cooked, a plus. They said they just needed 2 minutes on the grill, which was nutso. I would have liked them cooked a lot longer. I 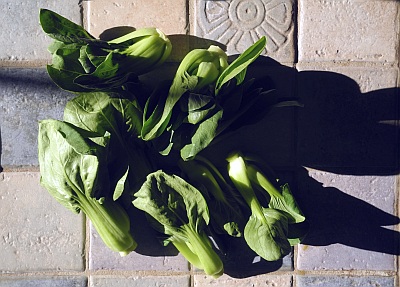 started a cup of Thai jasmine rice (with 1/2 tsp salt in 2 cups water) as soon as I got out of the shower.

I had found these bok choy – way smaller than “baby” bok choy usually is, so I have referred to them as pre-natal for fun – at the Bowl a few days ago. They were still in perfect shape. Since the leaves were so small, I decided just to break the off and leave them whole. I washed them early, and spun them, and left them to dry, then cooked in a 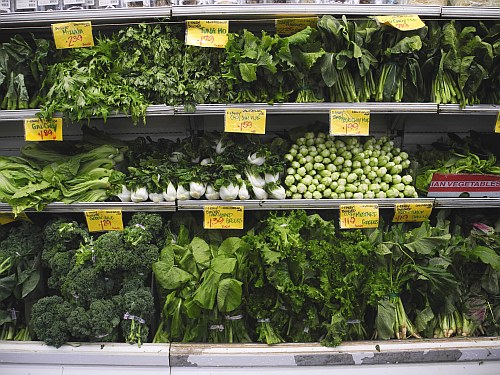 Those teensy ones – how could I resist? The 8 plants totaled 0.37 lb, according to the charge slip. 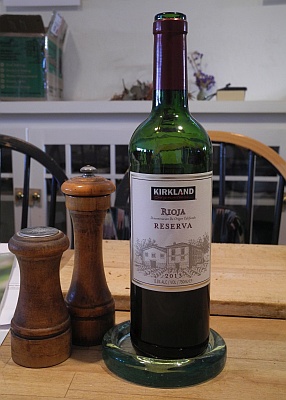 bit of olive oil and butter (salted) till well-wilted, and finally put in some water so they could steam a bit to doneness. It’s amazing how much greens cook down – I used the 12″ Revere frying pan to cook these (could have managed with the 10″ to be sure, but…) and they just made two normal-looking servings.

D decided on a Costco Rioja, which I’d bought again on my recent trip b/c he’d liked it previously, and been impressed by the price ($6.99!). It was a fine choice for this meal.

We had half of the remaining quart of sorrel/potato/leek soup. I cut too many (three) large leaves of sorrel for the fresh julienne on top, and a pile of chives for same. We finished off the sour cream, which had been one of the arguments for having this soup now, though the other – that the sorrel was abundant and huge – was the more compelling! I suggested we add a bit of Cambozola from Costco, and some crackers (Carr’s Original Water Table Crackers were open, and excellent with the cheese), and that was a lovely lunch. That much cheese actually took 6 crackers, not four 🙂