Spaghetti with fava beans and prosciutto; zucchini with onions – 7 July 2019 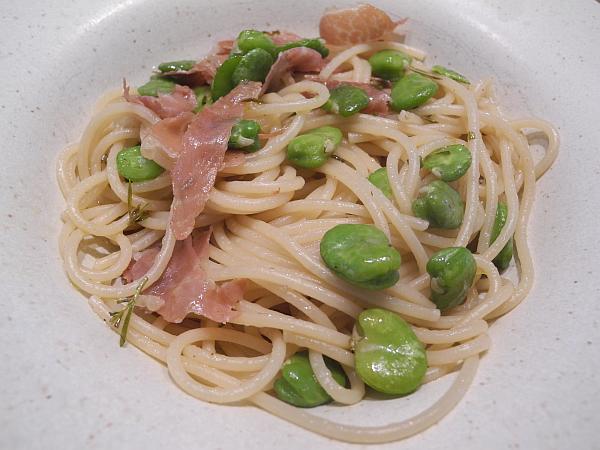 We decided Friday not to plan Sunday dinner but to punt it; then I went to the Bowl and found, among other things, very nice-looking fava beans, and bought them assuming they’d come in handy at some point. We had 1 1/2 strips of prosciutto left over from two previous dinners, and D combined those with the favas to make a really good pasta coating. He started by cooking some winter savory (from the garden) in olive oil, then added the shelled, blanched, and peeled favas, and later 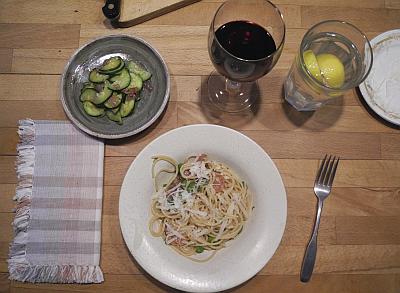 (I gather – didn’t see) the prosciutto which I had torn up. He cooked the spaghetti and tossed it into the frying pan with the topping and served into heated bowls. D was particularly happy with the taste of the winter savory in this dish. Also there was a small plate of grated Pecorino Romano which we sprinkled over the top of the pasta. I was skeptical and tried a small bit first, but it was a perfect addition.

I quartered (crosswise) and sliced about 3/4 of a medium zucchini, of which D had used some for a salad previously. D was cutting up red onions and I asked him if that was for the pasta, and he said no for the zucchini. I prefer zucchini without onions, but he was doing most of the work so he gets his choice this time 🙂 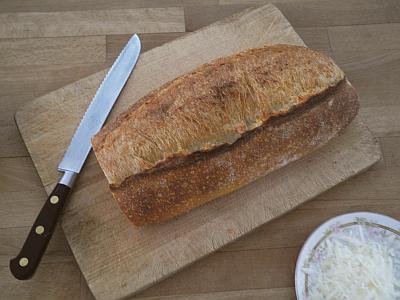 D ran to the Bowl just before dinner to get the bread he always prefers with pasta: Acme Italian Batard. He also got a bag of the cat food that we give the neighborhood ferals, so they leave our feral’s food alone. She has had to be switched from the cheap stuff to this $$$ brand due to peeing issues.

D brought up an Epicuro Salice Salentino – impressively good wine for about $5 from TJ’s – and we both thought that went well with the pasta.

We had two peaches from Tuesday that were softening without really ripening. One had a moldy spot in the morning and I cut that out, but decided to leave the two peaches for dessert and grill them. (We had some from Saturday that were ready for breakfast anyway.) I cut the peaches into perhaps 3/8″? slices, rubbed them with olive oil (too lazy to wash the brush so didn’t want to use it) and grilled on the preheated (3 minutes) range grill for 4 minutes on the first side, moving them around when one was cooking faster than the other, and then 3 minutes on the second side. They were quite a nice dessert, cooked this way. 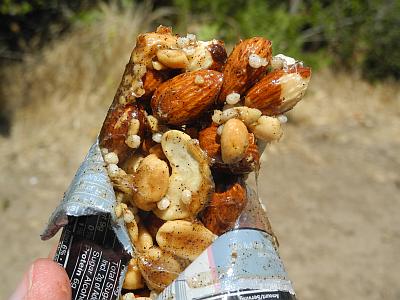 We got started late for our trail walk, and brought along two KIND bars, planning to have a small lunch to finish off after we got home and did our weight work. I thought the chocolate one was best, but I also liked the nutty one. The chocolate one seemed more like an indulgence, though. D thought we should have nachos to use some of the Costco avocados that are suddenly all ripe, but I suggested an avocado-and-olive salad instead, and he thought that sounded good (no pic of that, though). He washed up a pile of portulaca, which surprised me, and

I washed up one and two halves large romaine leaves. D suggested using two avocados, which had me LOL b/c splitting one of them inundates the plate with chunks. Too bad we neglected to buy bread just before lunch b/c it would have been nice to have with the salad, and would have let us enjoy more of the loaf when it was fresh.