Patricia Wells’ chevre with tomato sauce, olives, and herbs; kale from the garden – 1 May 2017 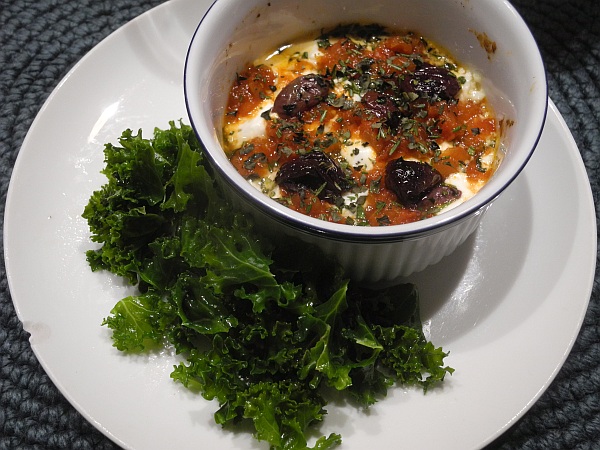 We considered going out to someplace low-key b/c it was our anniversary (and Riva Cucina is not open on Mondays) but finally elected just to have a good (as usual) dinner at home. Working on using up the Costco, 21 oz. vat of Laura Chenel goat cheese (horrible size, bad container – bring back the 11 oz. log!) I decided to make this long-time favorite. Which is also super easy if you have the We 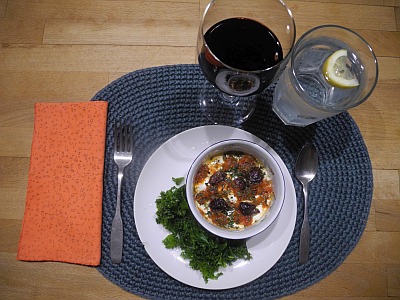 lls Sauce already made. I defrosted a 2 cup container of sauce and refroze most of it in ice cubes (2 Tbsp each) and left out just enough (about 6 Tbsp) for two servings of this dish. I crumbled just under 2 oz. cheese (put the casuelita on the scale and tared it!) into each dish, topped with an excess of oregano (instead of marjoram this time) and rosemary, both minced. Actually, it goes cheese, herbs, tomato sauce, halved olives

(5 Gaeta for two servings, wiping us out, which was good b/c we’ve had these awhile – 6 would be better…) then the rest of the herbs. Broil (with foil over the edges of the dishes to protect them) about 3 minutes, serve.

I cooked the kale by boiling it in salted water probably 4 minutes (it turned such a pretty green!), then drained and reheated with butter and salt. 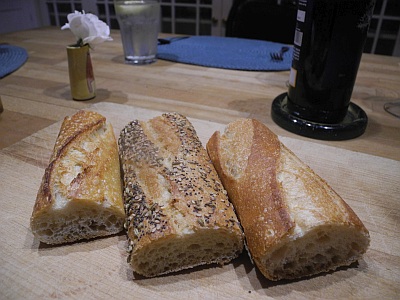 I brought Acme sweet (right) and sourdough (left) and Semifreddi seeded baguettes to a lunch at work, and they were not eaten up, so I gave away a bunch. But first I asked D what he woudl like for dinner, and he said “some of each,” so that’s what we had. But we actually ate up only one – I think (writing the 7th) the seeded one. Saved the other two for tomorrow. 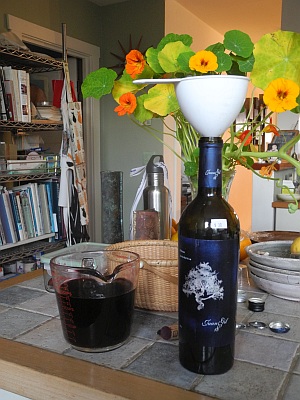 D found a rather pricey wine from (we think) The Wine Mine (b/c of the price tag – it looks like theirs) by Juan Gil. It’s called 18 Meses, Jumilla Red Wine, and is 60% Monastrell, 30% Cabernet Sauvignon, and 10% Syrah. 2011. Serious knockout drops at 15.5% alcohol. When D opened it he thought it seriously needed airing, and poured it back and forth quite a few times. We were not that impressed with it (to justify its $30 price tag). Kind of surprised to have bought something this $$ at Wine Mine b/c it’s unlikly we actually tasted it (at that price, their tastings being only $1 for 5 wines) and it would be surprising to buy it “on spec” at that price. So, a small mystery. 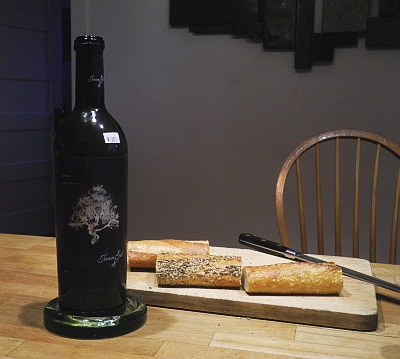 E pruned their wildish white rose bush and R brought over a vase full of the cuttings, this being our anniversary and their table being too small to hold this bouquet. D rearranged them later, but I liked them from the start, even a couple of bedraggled ones 🙂 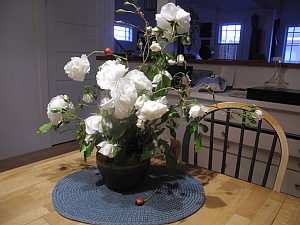